A Pho for Tết 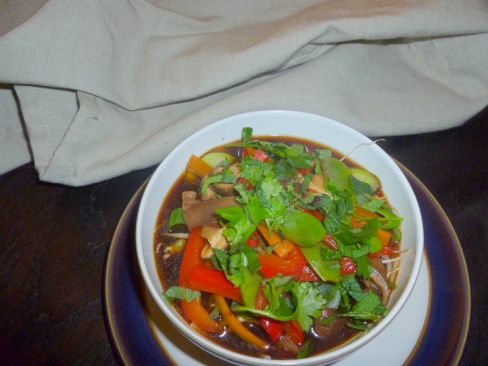 Pho what a lovely soup!

Yesterday was the Lunar New Year, which is celebrated by the Chinese, Korean, Bhutanese and Vietnamese cultures. It marks the first new moon of the first  lunar month. There will have been celebrations wherever there are communities of these cultures. They are also traditionally times for family, so there is even more reason to celebrate.

What better way to kick start my own New Year’s Resolutions than to jump right in at Lunar New Year and have a go at some asian food? I have eaten a lot of Chinese and Vietnamese food, so I thought that this is where I shoud start on this quest. Never one to make things easy for myself, I decided to have a go at Hom Bao (steamed buns) from scratch, but that will feature in my next post.

Because the Hom Bao would take up a lot of time, I decided to go simple with the Vietnamese dish. Pho in one kind or another is a staple dish, and it seems that every Vietnamese household has a recipe. I can’t say how authentic this is, but this is my version.

I chose Pho because it has lovely clean flavours, but also because it is a versatile recipe that is easy to adapt to local ingredients. The fact that I was ready to go with some chicken stock may also have helped in the decision, but I can’t say for certain!

Feel free to adapt the recipe below. Obviously, I used a meat stock, which gives the soup a big umami hit.  I have made a version of this soup with different vegetables and with beef stock before. The essential ingredients are the noodles, the chilli, the coriander, the lime and the asian spices and seasonings, to be honest. Use what you have, use stuff from the garden, or from the bottom of the fridge. You will still end up with a really tasty and filling soup. The amounts given here will serve 2.

500 ml decent chicken stock. Rich, homemade stock if you can – it isn’t hard to do, and the results will be worth it. If you really, absolutely must, use the stock you can buy from the chiller cabinet, don’t try this with a stock cube.

1 red chilli, cut on a diagonal. Use whatever strength of chilli you can handle. If you really don’t like spicy food, don’t use a whole chilli, but you need at least a little.

Roots or stems of a small bunch of coriander

Some mint leaves (if you can get vietnamese mint, so much the better), cut into a chiffonade.

Lime juice,  and pepper to season

Add the cinnamon, star anise, ginger, chilli, fish sauce, soy and lime to the stock, and heat it gently. If you have coriander roots, scrape them clean, then press them with the flat of a knife to flatten them before adding to the soup. If you only have coriander stalks, cut them very finely, them add to the soup. Allow to simmer for 5-10 minutes, while you thinly slice the mushrooms. Add these to the soup and continue to simmer.

Meanwhile, julienne the carrot and the red pepper, so that the pieces are all of equal size. if you can get them really thin, you won’t need to cook them later. Halve the mange tout, and thinly slice the spring onion, both on the diagonal.

Cook the noodles according to the packet instructions, then drain and refresh under the cold tap. Divide the noodles between two deep bowls. Add some bean sprouts over the top of the noodles, and the spring onions and mange touts over that.

Remove the spices and ginger from the soup. If you have sliced up the vegetables into fine matchsticks, there is no need to cook them, so add them to the deep bowls. If you have not managed such small vegetables, then add them into the soup and cook for a minute or two.

Season to taste. The most important seasoning here will be the lime juice, which will balance the saltiness of the fish and tamari sauces. You may need a little or a lot, so it is important to tase before and during its addition.

Ladle the soup over the noodles. It is important that it is steaming hot, but not boiling. Sprinkle over the corander and mint, and serve immediately with chopsticks and a spoon.

2 responses to “A Pho for Tết”