A Box of Delight 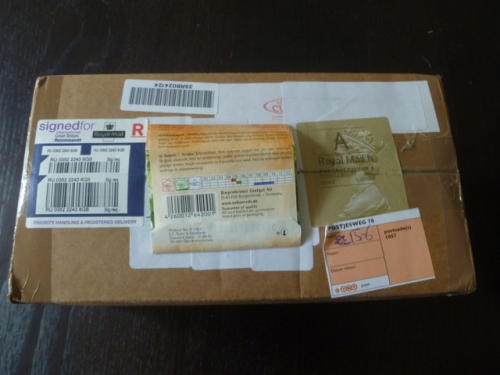 Exactly two Fridays ago, I had to chase the postie down the road for this. My doorbell is broken. He didn’t knock the door, instead shoving one of those really irritating “we-called-when-you-were-out-now-you’ll-have-to-schlep-to-a-post-office-across-town” cards through the door. Luckily for me, I had been waiting in for this, so I was able to spring into action when I heard the letterbox.

This my first Foodie Penpal Parcel. I had been seeing people all over Twitter talk about this, but thought that it was probably only for people in the same country. I was glad to discover that Carol Anne at Rock Salt had taken the idea from Lean Green Bean and was coordinating this blog swap for the whole of Europe. I am really glad it is so inclusive. There are also groups across a lot of the World, so you can probably find one and join in. You don’t even need to have your own blog; readers are welcome too, and many of the penpals will be happy to host a guest post on their site for readers to write about what they got.

I was matched with LoopyLou, and got The Lone Gourmet as the person to send me a parcel. Such a coincidence that both my matches were called Louise, and one also used to live in the Netherlands. I’m not sure if these matches are planned or random, but I enjoyed the synchronicity of it all, anyway.

I got a little carried away with the weight on my parcel, then realised it would have cost a King’s ransom to post from over here (this is a great tip for next time; jars are really heavy). I was heading back to the UK for Mum’s birthday, so I decided to post it over there. Through a series of coincidences and holidays, my parcel ended up being hand-delivered by my sister, and finally ended up in Lou’s greenhouse at the beginning of this week, in good time for the reveal day, but probably not in time for her to have used any of the ingredients. If you want to see what I got for Lou, head over to her blog. 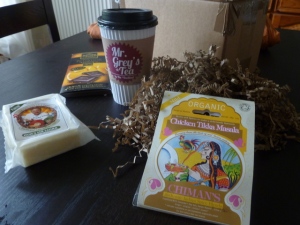 Louise at the Lone Gourmet was very kind and sent me things that she knows I can’t get over here. It was a real taste of home. A lot of thought went into this, and I’m really grateful to her for taking the time to source some typical English fayre.

Firstly, I got some Earl Grey tea. Of course, you can buy what the Dutch call Earl Grey over here, but every British expat knows that you can’t get a good builder’s-strength cuppa in continental Europe, and so tea is always something on the list of things that you ask other people to bring over when they come. I also love the packaging for this product – it comes in a paper cup which you can use to hold your precious brew. I love this idea. Multiple-use packaging really appeals to the Womble in me.

I also got a sachet of organic tikka masala mix, the most classic of the curry dishes for the British palate. It has a chicken recipe on the back, which I intend to try. But, I do think that this also has potential as a spice rub for white fish. I am going to halve the mixture, and do a little experimentation with this. 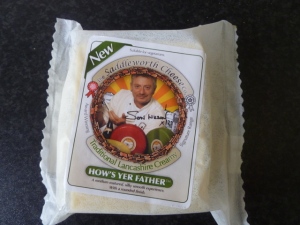 Louise got me some lovely Lancashire Cheese, which is quite local to her. The eagle-eyed amongst you may notice that it has a picture of a moustachioed Martin Platt from Coronation Street on the front. Apparently, like Blur’s Alex James, this is what he did when he left the Street, although I gather he is much less of a bore about it all. It’s a good cheese – a crumbly texture and slightly sharp. 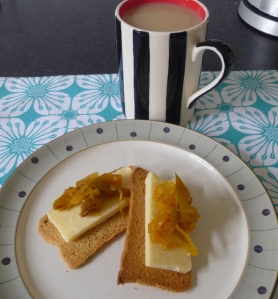 I had a snack of a little to test it when I opened the box (well, it would have been rude not to really), and then I used it in a tart with probably the last asparagus of the season. I will blog the recipe for this in the next couple of days. 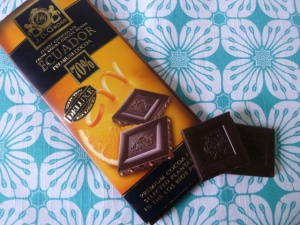 Finally, I got some extraordinarily good chocolate. I have managed to stick to only having eaten a single square so far, since I needed to open it to take a picture (honest, Gov), but I have had to hide it from the Big Guy. I think that this should be saved for a special chocolate mousse or something else that will do it justice.

Thank you so much Louise, for this wonderful box, and to Carol Anne for organising this lovely treat.

It has been so nice to browse through the two penpal blogs, find other new blogs, and get to know my penpals, not to mention the fun I’ve had thinking about the box I was going to send, and the ingredients that I received.

Here’s the rough outline of how it works:

7 responses to “A Box of Delight”