I have decided to add a new category to the blog, which I am calling Fed, as a way of indicating that I have been nourished by other people’s food, and one that goes with the alliterative themes of the blog. This will be a place to put recommendations. I like to eat out, and I thought that this would be a good place to discuss the food that I eat. This is an issue that many bloggers look at and think about, in a bid to decide how to do it. I have decided that I am going to write about places and food experiences that I love, and save you the average, the mediocre and (sometimes) the poor. This is because I have no desire to set myself up as a critic. Goodness knows, I was afraid enough of criticism that it stopped me from publishing this blog for such a long time. I am neither in the position nor have the desire to knock others who put themselves out there on a much more public scale. So, this will be a category about the great food I have had. And where better to start than with a trip to the Adriano Zumbo Patisserie, in Balmain, Sydney?

Adriano is a highly skilled pâtissier. I first heard about him on Masterchef Australia (sadly, not during my travels, but I have a secret addiction to most of the series in this franchise), where his challenges were always the most technical, time-consuming, likely to get your fingers burnt, and feared by the contestants. When I arrived to stay at my friend’s house here on holiday, I was delighted to find a branch of his modest pâttiserie chain, and vowed to give them a go. So one morning, the above selection was our breakfast. Obviously, we were a little greedy. The Big Guy has the sweetest tooth of anyone that I know, but even he couldn’t manage his half all in one sitting! That said, they were so delicious – you could taste the skills and the love that went into each one.

We had to try the famous macarons, which they call Zumbarons after their chef. They had an array of lovely sounding flavours, but we plumped for Lime & Mint Mojito, Coconut, Green Chilli & Lavender, and a Salted Caramel one each, given that we are bang on-trend with salt and sweet flavours.

The Salted Caramel were the perfect mix of salt and sweet, and you would expect. There is something about a salty kick at the end of the sweet caramel that prolongs the flavour. Whoever started that trend really knew what he was talking about!

The Lime & Mint was very tasty too.  The lime hits you first, and the mint flavour is lasting. Really well-balanced.

The Coconut, Green Chilli & Lavender  Macaron was subtle. Tastes floral rather than distinctly of lavender. The coconut is in the shells. The chilli is a subtle heat that comes at the end of each bite. My favourite.

The first one we ate was actually the Taste Like Doris. It was beautiful, but the delicate chocolate daquoise was already beginning to melt on the short walk home. It was a caramel , rum, orange and chocolate concoction, that tasted like the poshest jaffa cake in existence. 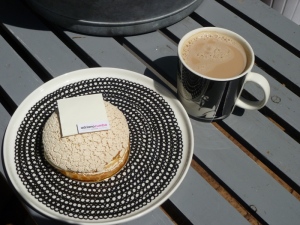 This is the Ssnowmanorr. It is a choux bun filled with bubble tea custard, lychee coconut crème, and a lychee gel. The lychee paste is delicious. I didn’t really get the tea flavour, but coconut and lychee were made for each other. Only thing I was happy to give away to the Big Guy was the white chocolate square. 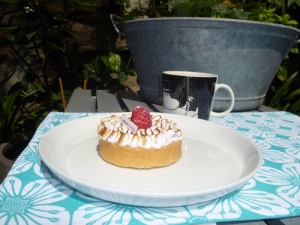 At first, I was dubious about this one. As soon as the lovely cake lady mentioned the liquorice crème in this little pastry, I was a bit put off. I couldn’t really see how that could work with raspberry. But the Big Guy was sold, so we added the Whizz Fizz to our little box of delights. The liquorice is really subtle, but works brilliantly. The raspberry coulis is very jammy. The pastry is light, crisp and melty, as all the best sable pastry should be. Beautiful to look at , and beautiful in your mouth. Not too sweet, despite jam, sable, and meringue! This is probably due to the almost invisible sherbet. This is very sharp if you can pick it up minus the cake. An amazing balancing act. 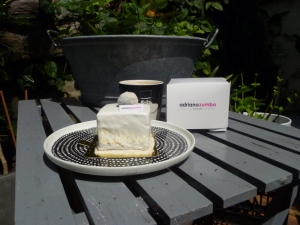 Adriano Zumbo is probably best-loved for his V8s of different varieties. People all over Sydney always talk about them whenever you mention that you have been. And now I know why – This. Was. Incredible. Warming and fruity, this was reminiscant of mulled sherry or cider.It had plenty of cinnamon and nutmeg, to make it festive, but really incredibly light cherries and the lighter than air vanilla sponge keep it away from cloying. I have never had anything like this before, a definite favourite. Good job I don’t live in Sydney…

UPDATE: I can also report that we couldn’t resist temptations, and had some more Zumbo treats a few days later. we were on our way for a drive South, and picked up some quiche and the New York Eclair. Another goodie! a classic eclair on the outside, but filled with a lovely fruity raspberry compote, and the slightly sour taste of New York cheesecake, rich with vanilla seeds. Even better than the classic French version.