The Freshest of Fruit

As I may have mentioned, I have been in the Philippines for work. I didn’t mention it before I went, because we were going to some areas of the southernmost island, Mindanao, which may not be considered to be safe. That said, we had a wonderful time, and saw no sign of trouble at all. 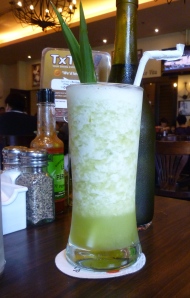 The thing I love most about travel is the different foods and flavours that I encounter. I ate many wonderful things, and I thought that I’d share some of them here with you. I hope you enjoy this little Philippine Tasting Plate. I also managed to bring back a few unusual ingredients, that I will be trying to make some interesting goodies with in posts to come.

Pineapples Were, Unsurprisingly, A Bit of a Theme

Of course, I ate a lot of fresh tropical fruits; some of which were new to me, and some were more familiar. I had my first taste of mangosteen and durian (albeit in a crème brûlée) as well as many more familiar fruits. The mango, much like the avocado after my trip to Australia, has been forever ruined for me. You just cannot get the soft, sweet , thin-skinned little jewels that you find in the Philippines. My colleague and I stayed in a beautiful lodge in pineapple country, where there was a definite theme to the place, from the napkin rings, to the juice we had everyday. Fresh pineapple juice is a great start to a meeting.

Seafood is very popular, as you would expect from a country comprising of over seven thousand islands. I ate some really lovely dishes. Tuna is also very popular there, with many of their delicacies containing tuna. I haven’t eaten tuna in years, because there aren’t many left, and there is so much bycatch with the techniques that many fleets use. I remained tunaless, so I haven’t tried many of these specialties.

I did eat very well in some very good restaurants. It is pretty difficult to be vegetarian in many of the local food places, all the Filipinos we met all said how much they love their meat. But that is not to say that it is impossible. I went to a very good vegetarian restaurant in Manila, who did a really tasty version of sisig – normally made with pork, but always with sharp flavours, often provided by calamansi (a local citrus fruit, more of which later). There are also many “foreign” food restaurants, where you can eat delicious vegetarian food. After a very long day of flight delays, and a cancellation, my colleague and I stumbled across an amazing persian restaurant. I am not vegetarian, but I can have too much meat, so I was really glad to find an Iranian curry, called Qalye Mahi. It was rich, soothing and sharp with tamarind, which isn’t something I’d really explored before. I must try to find a recipe for this.

Amongst the other local specialities I tried were Kare Kare – slow cooked pork in a peanut sauce; Bicol – a fiery pork in coconut milk with a lot of chilis; and the ubiquitous adobo, which is meat cooked in vinegar and garlic. A particularly good one was a squid cooked in black vinegar and squid ink; another one I’m going to play around with. One of the more surprising things to eat was a type of yam called ube. It is bright purple, and is used in sweets, pastries and ice cream. I was originally told to look out for ube by Sally, who left a comment on this year’s resolutions post. I’m glad I was told,  I really enjoyed trying new ways to eat purple root veg masquerading as dessert, thank you Sally.

I was also delighted to learn of a fantastic tradition called Pasabulong. This is where returning travellers bring their family and colleagues gifts of food. Even if they have only gone to a different city. What a great tradition!

I continued this on, by bringing the Big Guy some sweets and dried squid. I also brought myself a few treats, including some ube. I am going to try to plant some, and I will see what I can cook up with the rest, and the other goodies that I bought. But that may be the subject for future posts.

6 responses to “A Philippine Tasting Plate”