As you will have seen from my Philippine Tasting Plate, I brought back a few things to use in my home cooking. And what better way to celebrate the recent good weather we’ve been enjoying than to use tropical ingredients?

I got the idea for this dish from a corn salsa I ate at Tomatillo. As is often the way, restaurant food inspires my dishes. The Tomatillo salsa is nice, but I knew that I could twist it a bit to make it even better.

I was already thinking that it needed courgette. Then I remembered the calamansi that I had packed away so carefully, and that was now residing in my fridge. I knew that I had to try to make the dish that began a while ago, and had now taken root in my brain. 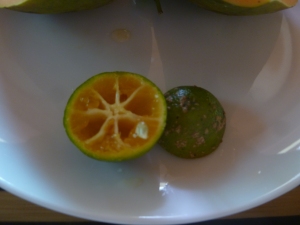 Calamansi is a small citrus fruit. You can use them like limes, in salads dressings and to season stocks etc, but they are also a popular drink in the Philippines, as well as being a key ingredient in sisig. They are both sweet and sour at the same time, and have a lot of flavour despite their diminutive size.

They also have a lot of pips. I was going to chance my arm and see what would happen if I planted a few, but I forgot to tell the Big Guy what I was doing, and they got thrown out. Ah well, I know that growing citrus from seed is notoriously unreliable, so I probably saved myself a fair bit of disappointment in any case.

I first made this salsa for a birthday canal boat picnic I held for the Big Guy. It was great as a dip with tortilla chips. I was a little nervous to present it as salsa to that crowd, amongst whom were some Americans who have an in-depth knowledge of all things Tex-mex. I have previously been taken to task for a guacamole, because I had put tomato in it, which apparently makes it pico de gallo, and not guacamole. I have also been told my (Mexican recipe) chile con carne is not a real Chile (but the consensus was that it was very tasty). I needn’t have worried, this went down a treat with everyone on the boat. And no-one objected to me calling it a salsa.

I have since served this at a barbecue, where it was similarly well received, and went equally well as a garnish with my home made burgers as it did with vegan enchiladas. I think it would be great as a salad as well.

I made this with tinned corn, but you could also use fresh a little later in the year, although I’d recommend grilling it in the husk first on either the barbecue or under a hot grill. Then shuck and add to the salsa.

Juice and zest of 6-8 calamansi (or one lime)

1  tin of sweetcorn, drained (or one whole corn cob, grilled and shucked)

If, like me, you dislike raw onion then steep the chopped onion in the calamansi juice and zest for at least 10 minutes before you make the rest of the salsa. The amount of calamansi that you need will depend on the size of your onion. You should ave enough juice to just coat all of the onion. I have made this twice, and needed different amounts each time.

Raw courgette doesn’t taste of much, which puts many people off trying them twice. The secret to bringing out the flavour is to blanch them.  Because these are finely diced, they only need to be steeped in boiling water for about 30 seconds or so. If you like, you could squeeze a little more calamansi juice (or a couple of drops of lime) into the water. Drain immediately, and run under the cold tap to stop them cooking further. Allow to drain completely. The courgette will now taste of courgette, but will still have a bit of bite.

Mix together the onion, courgette, sweetcorn and chili. Season well, and set aside the salsa for about an hour to allow the flavours to meld. Taste, and add more chili, citrus juice or salt and pepper to taste. Stir through the chopped coriander and serve.