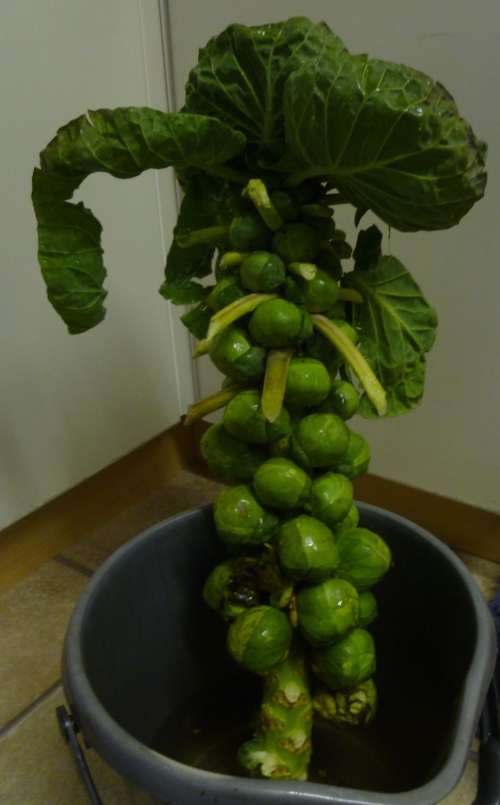 From Bleurgh to Bogies

“What’s the difference between Brussels sprouts and bogies?”, goes the old joke, (You can’t get kids to eat Brussels sprouts!), and for many years these particular little green balls have divided households, especially during the festive season.

In my house, tradition called for sprouts on the plate, even if the kids left them there. Every other year it was the subject of a running battle between  my grandmother and me. As a small child, I would absolutely refuse to eat them; boiled, as they were back then, with the mystifying cross cut in the base. A bit like I do now, my Gran abhorred food waste, and loathed the fact that the sprouts would sit, untouched, on my plate. Unlike me, Gran did not do creative things with leftovers. She would threaten to give me those emerald cannon balls for the next meal, and the next, thinking that I would capitulate at some point and eat them. I was made of much stubboner stuff, and we would grumble and mutter at each other, while the sprouts festered somewhere (usually in the dog).

Nowadays, boiling sprouts is no longer compulsory. I am still not going to plant these in favour of kale, cavalo nero, or purple sprouting broccoli; but if I am presented with a stalk, I will no longer stamp my feet and dig in my heels in a resolve not to get them down my gullet more steadfast than that shown by Gandalf when he faced down the Balrog.

Instead, I have learned that sprouts are better if they see minimal water during the cooking process, and that they should definitely never be allowed to boil in water for any length of time. Indeed, unless you are making a soup of leftovers (of which more later), it is probably best to keep them out of water altogether, after they’ve been washed.

Sprouts are actually delicious, delicate and tender when eaten raw, so they make lovely salads and coleslaws. I think I got this from Nigel Slater, but pomegranate and sprouts are a lovely match in a salad. The sprout tops are also great for this, as they are tender and not as powerful as their smaller, tighter offspring down the stalk.

Cooking them in fat – bacon fat or duck fat is always a winner. I have done a sort of confit with halved sprouts cooked slowly in duck fat, and plenty of  thyme, which is pretty good, but not for those looking after their cholesterol.

I also like covering halved sprouts with a cartouche and letting them steam in a cm or so of stock in the bottom of a pan, until the liquid is absorbed. Again, meat stock is better, I often use chicken or ham stock, but vegetable stock is also good for this, if you are a vegetarian. This will take about 5-10 minutes on a medium heat, providing the stock is at simmering point when you add it to the sprouts.

The recipe that I’m about to share is an obvious combination, but  it works so well. And you can make a great soup with the leftovers (which I’ll be sharing here soon).

I hope that you have a go with some of these ways to eat Brussels Sprouts. I hope that together we can banish emerald green christmas bombs forever and move towards many more acceptable ways. The only question is, how do you eat yours?

A splash of water

If you are using fresh chestnuts, then you will need to peel them, and take off the hairy coating. This is the best method that I have found for peeling them. Once they are peeled, chop them roughly.

In a large frying pan, gently fry the bacon on a low heat, to render off some of the fat, and until the lardons are crispy. Remove to a piece of kitchen towel. Unless your bacon has given off more fat than a duck might, try to retain as much of the fat as you can.

Meanwhile, halve the sprouts, then shred them thinly.

Fry off the chopped chestnuts, until they start to brown. Add the shredded sprouts, and stir until the green brightens a little. Do not let them catch, burnt cabbage is not pleasant. Add a splash of water, and allow it to steam off.

Return the bacon to the pan, and mix well. Serve immediately with a big roast. This year we had a gammon. Don’t worry about the leftovers; soup is always a post Christmas winner.

2 responses to “Acceptable Ways With Sprouts”