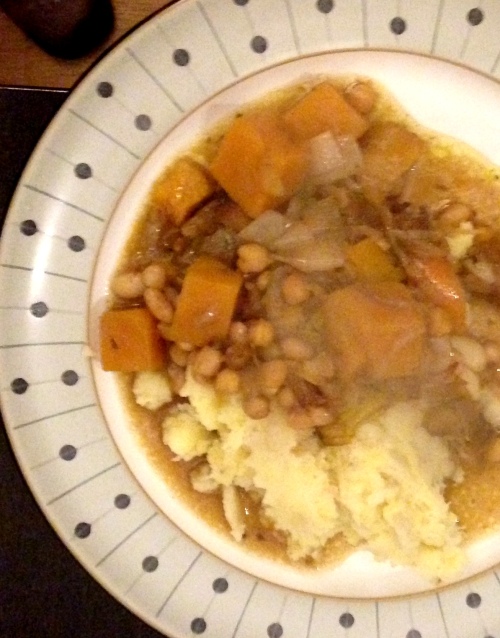 A couple of weeks ago, I found out that a few fellow bloggers had, like me, received Nigel Slater’s Kitchen Diaries II. Like me, they had also read it cover to cover, and enjoyed it as much as his first diary (which I have also read; I’m afraid my shelf life is too short for 50 shades, when I can fill my head with the sights, sounds and smells of food). Unlike me, Janice and Susan decided to pay him homage by hosting the Dish of the Month in his honour. Obviously, I was keen to join in, whilst cursing the fact that I hadn’t thought of it first!

I decided to cook from both books, on alternate months. Originally, I had intended to cook things I haven’t tried before from each of the books in turn. However, I was cooking stew for my new team, because I could make it the night before. One of them professed a love for beans and chickens. And just like laid plans, and mice; my intentions gang aft agley.

Once I knew of these preferences, I had to cook the humbly-named Chicken Stew and Mash from Kitchen Diaries (p.79). It has become a favourite. Although it uses winter seasonal vegetables, it tastes a bit like summer.

Two of my team are vegetarian. And you know me, I had to make them  feel as welcome as the others. So I needed a veggie stew. But couldn’t get away from the thought that this stew was the one I wanted to make. So, I had to come up with a vegetable version that would still hit the citrus and savoury spot, but with the same depth of flavour as the meat version.

The depth came from caramelised onions. The bulk came from pumpkin, as being in season, and good with orange. And a few chickpeas, because I had some that I’d cooked and frozen previously.

What I ended up was reminiscent of the original stew, with the savoury, citrus, and sweet tones from the orange, herbs and balsamic vinegar; but by necessity was pretty different. Since Nigel himself says in the introduction to Kitchen Diaries II “neither am I someone who tries to dictate how something should be done, and I am never happier than when a reader simply uses my recipes as inspiration for their own”, I think he won’t mind too much, do you?

If you’d like to enter Dish of the Month, then you can find the full details over at Farmersgirl Kitchen or at a Little Bit Of Heaven On A Plate. Add your post to the linky there, so that we can all see what dish you’ve chosen.

Pared rind and juice of an orange

If you are using dried beans and chickpeas, soak them in plenty of cold water overnight. Cook them in fresh, unsalted water. They will cook further in the stew, so make sure they are not soft when you drain them. Nigel and I agree on about 40 minutes.

Some of the depth of flavour in Nigel’s version of this stew comes from the Maillard reaction that occurs as the meat browns. I had to replace this somehow, and probably the best way is to allow onions to caramelise really slowly until they are brown. As they started to turn golden, I added the herbs and the bay leaves.

As the onion reaches a deep brown, add the garlic cloves and the orange rind, and cook for a further minute. Add the flour, and mix it in well, followed by the juice of half an orange once you’ve cooked the flour through.

Add the squash and the beans to the a deep casserole dish with a lid, then add the cooked onion and flour mixture.

In the same pan as you browned the onion in, soften the leeks, being careful not to burn them. When you can separate the concentric rings, they are about ready. Add the juice from the rest of the orange, balsamic, and about 500 ml of veg stock to the softened leeks. You can also add a pinch more of the herbs de Provence too, if you feel it needs it. I did. Bring all of this to the boil, season generously with salt and pepper, and then pour this over the vegetables in the casserole dish.

You want the liquid in the pan to come about three-quarters of the way up the vegetables, bearing in mind that the veg themselves will give off extra liquid as they cook. If you need more liquid, add more vegetable stock.

Cook for 40 mins to an hour at 180°C, until the butternut is tender, but still holds its shape. The flour that you have added should have thickened the sauce somewhat, but if you want to thicken it further, slake a little cornflour in a few drops of cold water, and mix that in. Return it to the oven for 5-10 minutes, until it has thickened up. If you are gluten intolerant, skip the flour at the beginning, and just do this step instead (you’ll need about a tablespoon if you are not using flour, then slake and add as instructed)

I return to Nigel’s instructions, and recommend that this is also served with a big pile of creamy mash  – potatoes, or a mix of potato and celariac – so that the juices can form little puddles in the mash.

5 responses to “Making Plans with Nigel”