Signs of Life and an Unexpected Salad

Apart from going to the Neighbourfood Market, I also found some inspiration in the garden this weekend. As always, I was late with getting my broad beans and alliums in. They should get planted before the first frosts so that you get an early crop in the early summer.

We haven’t had any frost yet, as far as I can tell, so I was still able to plant them out, although they will be a bit later than I had hoped. In an attempt to do some decent successional sowing, for once, I have only planted half a bed with beans, so I can plant more later. I also still have onion sets, but no space in their designated beds, so I will plant them in planters when I get some potting compost mixed up. I planted Troy white onions and Onion Electric (red) from sets, and Marco Garlic. I only used the fattest cloves, from the outside of the bulbs. The rest are waiting in my cupboard to have in some dish or another. No point in wasting them! The beans were Aquadulce Claudia and the reliable Sutton.

I also planted a French leaf salad mix, and some rocket to grow indoors as cut and come again salad, because I need something to use for the 52 Week Salad Challenge, as issued by Veg Plotting. I have decided to join this, because I like to grow my own, and forage for food. Salad leaves grow fairly quickly, so they should be good to help me get much better at the rhythm required for successional planting, which I am not great at. And I hope that it will help me to be more creative when it comes to salad. We eat a fair amount of salads, but they tend to be very samey, so I hope this will force me to think of more diverse things to go in them, and more creative dressings. 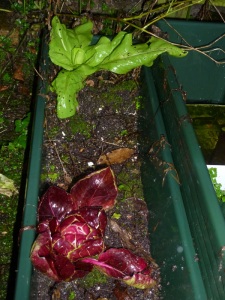 I currently have some rocket, mizuna, endive, perpetual spinach, fennel, beetroots, flat leaf parsley, and some carrots in the garden, all of which can be used as salad leaves, so I have time before my other seeds grow.There should be loads of things already starting in the wild that I can pick, but I won’t get foraging for a couple of weeks. We were also clearing an unloved part of the garden at the weekend, and we found some bonus lettuce in a planter that had seeded itself – a radicchio and I think the green one is a leaf chicory.

I only heard about the challenge when I got back from Australia, so this will have to be a 50 week challenge for me. I may not post about this every week, although I will tweet my pictures weekly. I guess it depends how excited I am about my salad in any given week! 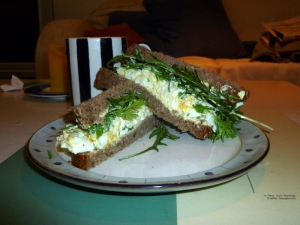 Last week was my first. I was fresh back from Australia, and away from all the lovely fresh, summer produce I cooked with there. I didn’t want a salad in the traditional sense, I think it would have disappointed. Instead, I found myself craving the comfort of an egg sandwich. Nothing goes better with egg mayonnaise than some sharp, peppery rocket. I found that I couldn’t shake the idea long enough to find any other kind of salad inspiration, so that was what I had.

This week should have been altogether more exciting. I had an aubergine that needed to be used up, and I had decided to use that bonus radicchio, although it will be sad not to have it sitting resplendent and red in the brown winter garden.

I made Divalicous’ Aubergine, Tomato and Sumac Salad. I am trying to cook with more spicy food, and I found this one last summer. Do give it a go – sumac can be found in many local stores these days. I left out the tomato this time, because I have no interest in the kind of watery tasteless ones that you can get at this time of year. Instead, I used more flat leaf parsley, added some carrot leaves and upped the amount of dressing. I also served it hot.

I had intended to quarter the radicchio, and put it onto the griddle pan after the aubergine had cooked. I wanted it to char, along with some red pepper, and serve it with a lemon and parmesan vinaigrette. The charring softens the radicchio’s sharp quality, and gives it a nutty flavour. If you try it, be really careful, they will burn in seconds, once they start to char. Slightly blackened edges is what you should aim for, but no more. I would have stirred through some quinoa for bulk.

However, while my back was turned, as I put the first batch of aubergine on, the Big Guy came along, and separated the leaves of the radicchio, making it too flimsy to try to char. So a rethink was required. Inspired  by Divalicious’ mention of fattoush on her salad post,  I decided to make a kind of fattoush sandwich in pita, with the radicchio and aubergine salad on top. It wasn’t as substantial as the other way would have been, but it was really tasty nonetheless. 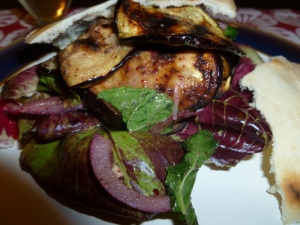 Something else that I have found this week is Foodcycle, who collect surplus food, and cook it in a café where you can pay what you can afford. Inspiring stuff, doing things that are close to my heart. I think their project rocks, and they are trying to crowdfund to enable them to keep running. They only need £5k to run for a year, which is a ridiculously small amount for all that they achieve. They have 4 days left to hit this target. If you can, please go along and pledge a little, you won’t have to pay if they don’t hit target, but every little helps, as they say.

Unfortunately, the crowd funding scheme is currently only set up for people in the UK, so if you are outside of that jurisdiction, then you can make a direct donation through their money giving site. I know they are very grateful for all donations as well. Or try and find a local scheme that you can help out. If you do, I’d love to hear about it.

16 responses to “Signs of Life and an Unexpected Salad”