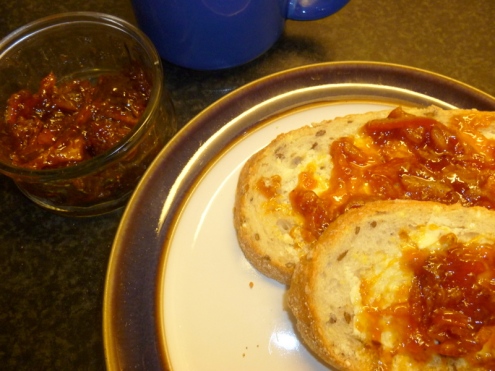 The Business at Breakfast

Marmalade is pretty British, as far as preserves go. Even then, there is controversy as to whether you should have the zest chunky or fine, and some people even think that you should have no zest at all. They are entitled to their opinion, although I think that is really just a citrus jelly!

I find that it is not until you leave a country that you start to miss the things that you used to take for granted. Marmalade is one of those things, and I enjoy making preserves. However, I have not been able to find reasonably priced marmalade, and neither have I been able to find Seville oranges here either. Seville oranges are much sharper than their normal edible counterpart, and thus make the perfect balance of sweet and sharp that is required in most good preserves. They are also only in season for a short time, December to early February, so most marmalade production happens in the early part of the year, when it is too cold for planting, but the festivities over Christmas are out of the way.

Having resigned myself to the fact that I cannot make traditional orange marmalade, I am currently embarking on a series of experimental marmalades including lime, lemon, and grapefruit.

Heather at Breakfast by the Sea suggested that I try clementine marmalade. If you haven’t already seen it, I really recommend you have a look at her blog, it has great recipes and some really beautiful photography.

I hadn’t thought of clementines, but they are a better replacement for Seville oranges, if you want a sharp, but still distinctly orangey flavoured marmalade. This one is the perfect trial marmalade for a recipe that I am developing, which I hope to blog about later.

I found some lovely clementines on our local market with the glossy leaves still attached. This appeals in the waste-reduction geek in me, because citrus leaves make a really tasty tea. Give them a good wash, and then steep them in boiling water. Add a bit of cinnamon stick if you want to, it will be just as good.

As with many of my preserves, I used Pam Corbin’s Preserves book. I used the cut fruit method for marmalade, but amended the amounts slightly, for what I thought was suitable for the clementines. 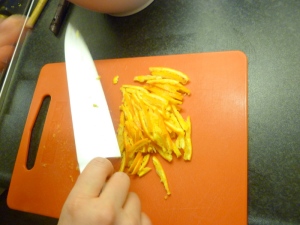 I probably took this a little too far while trying to get this batch to set, and it had gone from beautifully bright and orangey to having a more caramel flavour. If I had pushed it any further, I would definitely have burnt it. To compensate, and inject a little more orange, I stirred through the Cointreau after the jam was off the heat, but while it was setting before potting up. You can also leave the Cointreau out, if you prefer.

Having done a little reading up, it seems that clementines catch a little easier than Seville oranges. This being the case, you need to watch it like a hawk as it approaches the setting point. I would even take the unusual step of advocating stirring at this point, so that parts of the marmalade cannot catch and burn. As always, the setting point is reached when the jam reaches 104.5°C, or when it wrinkles when you perform the fridge test.

You need to leave it in the pan to set a little, so that the zesty bits don’t all sink to the bottom of the jars when you pot them up. Pot the hot jam into hot, sterile jars and seal immediately. Lovely, tasty orange marmalade. Really great on toast for breakfast. Thanks for the suggestion, Heather.

I left a layer on the bottom, in case I did catch any of it. This will feature in another recipe later on. Well, you didn’t  think I would throw it out, did you?