One a Dollar, Two a Dollar…

I have been searching around for ingredients for an Easter dinner for my friends. These are mostly the same friends who came for the International Christmas Dinner, so I wanted something that would encompass all of our traditions, as well as a nod to the Dutch. Some of these recipes will appear here in the coming days, as they are much less specific to Easter, but this one couldn’t be delayed.

One of the traditions that I found out about was the Australian one. For friends from the Southern Hemisphere, Easter heralds the start of autumn, and thus is naturally a little less about rebirth and rejuvenation, even though they  do continue to keep many of the same traditions as us in the North (hint: eggs and chocolate feature in all Easter traditions, as far as I can tell).

According to this website, there are a few key differences. Anyone who has seen an episode of Border Security will know that Australians are none too keen on letting in non-native animals, due to the havoc that they wreak. It is no surprise then, that they have replaced the Easter Bunny with the much more native Bilby. However, my chocolate work needs a lot more practice, and it is certainly not up to making small chocolate marsupials without a mould.

So, I was very happy when I saw the fact that the Aussies have taken the hot cross bun, and made their own version. With chocolate.

I had already decided to make traditional Hot Cross Buns for dessert. Strictly speaking, they are served on Good Friday, but as it is my tradition to break the rules for international dinners, I am going to serve them for Easter Sunday itself. And I get to do two kinds. We will serve them toasted, to be smeared with butter moulded in the shape of a lamb, which is a Dutch tradition. 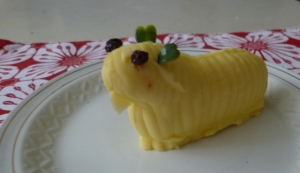 Aw Look, a Butter Lamb! We Named Him Wonky

I made the British buns using the recipe from the River Cottage Bread Book, by Daniel Stevens. Then, I adapted it to make what I am calling Southern Cross Buns, which I think are good for any occasion, and you can keep the cross, since they are named after the Australian flag.

And I photographed the steps for you.

250 g strong white bread flour (plus some for dusting)

You may remember that I made my own candied peel. This is not compulsory, but it does make it a lot easier to use only the orange peel for this recipe. If you have (or wish to make) your own candied peel, chop it finely before you start the rest of the steps.

Remove the Seeds from the Cardamom Pods

Also lightly crush the cardamom pods to release the black seeds inside, and grind these to a coarse powder with a pestle and mortar.

Sieve together the flours and the cocoa. I usually skip the sifting step in a recipe, but this will help prevent the cocoa from forming lumps.Mix together with the sugar, salt and yeast 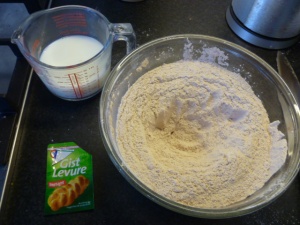 Make a Well in the Centre of the Dry Ingredients

I found that mixing boiling water from the kettle, and cold milk from the fridge, the resulting liquid was warm, but not too hot for the yeast. You can use a food mixer with a dough hook for this recipe, but I am gadget-averse, so I had to do it with my hands. whichever way you choose, the dough is fairly sticky. Pour the liquid into the well, and mix. 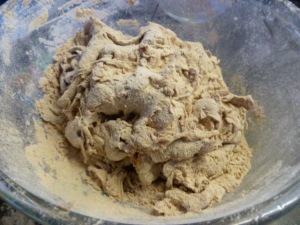 After Mixing in the Milk & Water

Once it looks a bit like this, add the butter and the egg. This is when it gets sticky. Mix it well, so that you cannot see lumps of butter in the mixture anymore. 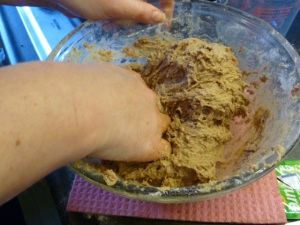 The mixture will get a little smoother

Then add the chocolate, candied peel and the ground cardamom. Knead this in well. 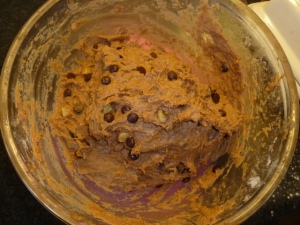 When it looks like this, cover it and leave it to prove

Try and leave it somewhere warm. It should take about an hour. I left it a bit longer, because I was busy with getting a lamb cooked, and other things. It was fine, and still rose nicely. Knock back – by punching the air out of it. 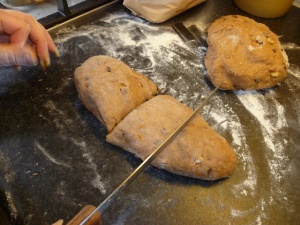 I got the proportions mostly right when I cut it. Only one was smaller than the rest. Make it easier on yourself by cutting the dough in half, roughly shaping each half into a thick sausage which you cut in half, then half again. It should be fine, if the sausage doesn’t taper too much.

Shape each piece of dough into a round. The following steps are straight from the River Cottage book, but they work really well, so they are the steps you need. Put the flat side of the dough on a lightly floured counter. 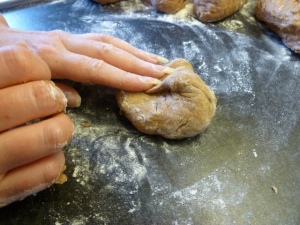 Each time that you do this, turn the dough a little, then repeat. Do this until all the dough is folded into the middle, and press firmly. Flip it over onto the other side. If you are not that confident in working sticky dough, like me, then you will probably want to flour the work surface again a little bit. More confident bakers work focaccia, which is a much wetter dough, so you will probably be fine. I found that I didn’t need to flour the buns later, because they were fine after I floured the surface.

The next bit is difficult to describe. You need to stretch the top of the bun, while tightening the pinch at the bottom. To do this, you need to flatten your hands, place the heel of one hand against one side of the roll, and the fingers of your other hand on the other side. 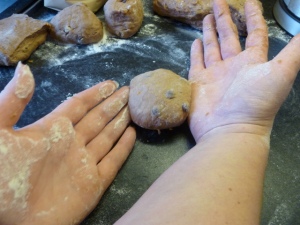 Step 1: flatten your hands at either side of the bun

Next you need to move your hands in opposite directions, and bring them together under the bun, so that it spins. This will stretch the top of the dough. 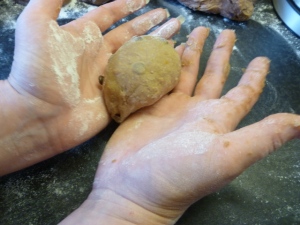 Step 2: Spin the bun, by moving hands in opposite directions

You will end up with your hands in the opposite configuration to that in which you started. 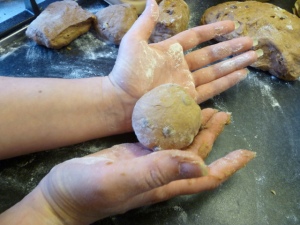 Step 3: how your hands end up

Do this little move three times per bun. Then put it on a board, and dust it lightly with flour, if you didn’t do it on the work surface. 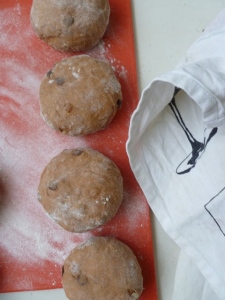 While the  buns are proving, mix up the flour and water, with a whisk. This will form your cross. I think the paste needs to be fairly thick. If you get the thickness right, I don’t think you need the amount of flour I have given here. I think mine was too thin, because the contrast on the ordinary bun was not good enough, so I didn’t get a cross. The contrast between the chocolate buns was much better, due to their brown colour. However, for you I have upped the ratio of flour to water. My advice would be to start with 50 g flour, and very slowly add the water, until you get a thick batter. it should leave ribbons when you pour it from a spoon, not run off.

Once you have a good consistency for the paste, and the buns have proved, then you need to make the cross. Transfer the buns to a baking sheet. Put the flour paste into a sandwich bag (or piping bag, if you have all the fancy equipment) and snip off a really small corner – be careful, the piped line is much bigger than the hole appears. Pipe the paste over the bun in a straight line, then again, at right angles to the first. 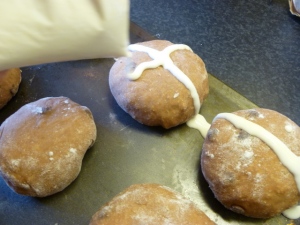 The piping bit is tricky, and needs a fairly steady hand.

I have to admit to a few drips where there should be none. They wiped off easily enough, but I had a thin paste. It is best to be as careful as you can.

Put the baking tray in the oven, and bake for between 15 and 25 minutes. Mine took nearer 25 minutes, so keep an eye on them. Like most bread-based products, they sound a little hollow when tapped on the bottom, when they are done.

While the buns are in the oven, melt the apricot jam and the water to make a glaze. Glaze them by painting the jammy liquid  over the top of each bun as they come out of the oven.

Leave them to cool on a wire rack. 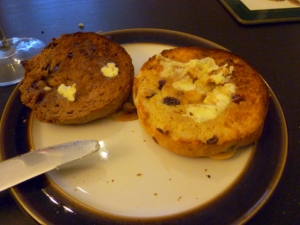 Toasted is the correct way to serve these. Possibly slathered with butter from a wonky sheep.