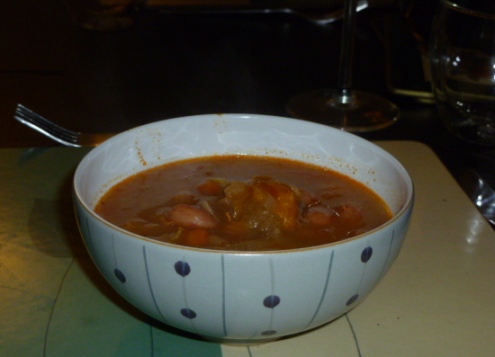 Despite the changeable weather, it is most definitely autumn. There are no more leaves on the trees, and the clocks will go back this weekend. To me, this means using up beans. We have been eating our borlotti beans for a little while, and I had a few other veg that I had in the ground or in the fridge.

Soup is always a great way to use up veg, and minestrone soup has beans as  the key ingredient for this hearty vegetable soup. As long as you have good base flavours from onion, carrot and celery, there are a million other veggies that you can add.

I used an onion and a half (the half was leftover from something else, and it needed using up), 3 carrots, 2 sticks of celery and a leek, which I chopped finely and sweated off with a few sprigs of thyme, a bay leaf and a sprig of rosemary. I added a  couple of cloves of chopped garlic, and cooked them off a little before adding the stock.

I am a bit of stock obsessive, and always have portions of roughly 500 ml of various stocks in the freezer. At the moment, I have pheasant, and beef. I usually always have vegetable and chicken stock too, but not today. So, I used 500 ml of beef stock and added water to cover the veg.

As this came up to the boil, I shelled the beans – this time a mixture of borlotti and the last of the french beans, whose pods are getting leathery, but the beans inside are large enough to eat on their own. I chucked them in with a few chopped pomodori tomatoes (you can also use tinned). I left the soup to simmer until all the beans were cooked through. You can also use dried (and soaked), or tinned beans if you haven’t any from the garden.

About half way through cooking,  I had a taste, and added a little tomato puree, and seasoning.

I also had half a fennel to use up, which I chopped finely. I love fennel, but wanted to retain some crunch and the fennel flavour as separate from the overall soup, so I didn’t add it until about 5  minutes before the soup was cooked.

I would have added a bit of shredded cabbage, kale or cavolo nero at this point, but we managed to lose the sweetheart cabbage we had bought at the market, so we had to do without that tonight.

Another traditional ingredient in minestrone is pasta. I had some fresh tagliatelle, because the Big Guy often buys it on impulse. I also wanted to try something a little different, so I divided the soup at this point, and chucked in some chopped tagliatelle into one pot, cooked it for a couple of minutes and ate the first night. It is also possible to use smaller pasta shapes, like acini, or ditalini. However, I was using what I had. I think smaller pasta is better in soups, so if I only had dried, I would have cooked it and chopped it before adding at the last minute.You can use rice if that is what you have too – either cook it in the soup or chuck in some cooked rice about 5 mins before serving.

I was recently inspired by a recipe from Niamh Shields, of Eat Like  A Girl, fame to try Pumpkin Gnocchi. I have been following her blog for a few years now, and this really seems to be her year, with new columns, a book, and a truck-load of awards. I have to say I am really pleased for her, I have tried a lot of her recipes and they always turn out well, and she is a real enthusiast on the subject of all things food.

Anyway, back to the gnocchi. As I have pumpkins, and pasta is added to minestrone, I thought that I would combine the two, so I made up a batch of the gnocchi, using Niamh’s recipe. I brought the soup back up to a simmer, and then cooked the gnocchi in the soup. I served it with a good helping of chopped parsley.

I haven’t  given a formal recipe for this, as with most soups, the amount I make largely depends on the ingredients that I have to hand.  As this is an Italian recipe, I am sure that there are many different versions, and this will not be what any Italian mothers would have added, but that is the beauty of such a  versatile soup, where pretty much anything goes.