A Silky Soup for September 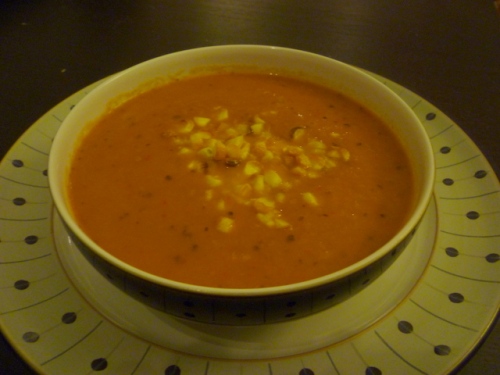 A Change in the Seasons

OK, so I was clearing out the fridge, but this is a great way to use the last tomatoes and aubergines of the season, and the first sweetcorn of the next one.

At the moment, we are trying to avoid calorific food, but I am determined that does not mean that we will miss out on flavour. This is easy when you can pack your salads and other dishes with loads of fresh herbs, but as we near the end of the herbs in the garden, I am looking to spices to plug the gap. And they are doing a great job.

My Sister just had her hen do, and I made everyone roasted aubergine with a chermoula spice rub. Partly because I was doing vegetarian, and also partly as part of my quest to make more middle eastern food.

When I found a couple of aubergines in the fridge, I initially thought I was going to make a chermoula and aubergine soup. When you roast or burn aubergine in its skin, it develops a lovely smoky, silky texture, as you can see from Baba Ganoush and similar dips. That was also going to give the soup a richness without the need for fat or cream, which is perfect for how I’m trying to eat at the moment.

As I kept poking, the fridge also relinquished some tomatoes and half a red pepper. In the spirit of not wasting food, I decided that they could go in the soup as well. And since I was already roasting the aubergines, I may as well roast these too, making the oven use more efficient, making it easier to peel the veg, and also to develop a bit of flavour, especially of the later developing vegetables that may not quite reach their full potential.

At this time of year, the sweetcorn are just appearing too. The Big Guy loves fresh corn, and we had a few cobs, though not yet from our garden. Since the soup was to be spicy and smoky, I didn’t want to just let the golden little kernels cook in the soup itself, I wanted them to add to the overall smoky flavour, so I decided to put a cob under the grill until the kernels were browned.

I had also intended to use some preserved lemons to add to the soup, in keeping with the chermoula idea. I was going to chop them fine, and use them to garnish the soup, but when I tasted it, it definitely didn’t need a sour salty note. Instead, I opted for a spoonful of yoghurt, to counter the fact that the chilli I had used was much hotter than expected!

This soup is great for the start of September, as the summer turns to autumn, and the nights get that bit colder. And it turns out that aubergines are great to add creaminess to a soup without the need for dairy too.

4 cloves of garlic, still in their skins

1 cob of corn, with the husk removed

Put in the oven to roast for 30-40 minutes, until the vegetables have taken on a bit of colour. After about 15 minutes, add the garlic cloves, so that they don’t burn to a crisp. You want them to be golden and soft, not crunchy.

Once the vegetables are roasted, put the grill on high, and put the corn underneath it. You will need to turn it as it cooks. If you have a separate grill, which I don’t, you can do this at the same time, it may take a while.

Meanwhile, dry fry the cumin until it is fragrant, then grind to a fine powder in a pestle and mortar, or a spice grinder.

Sweat the onion in the rest of the oil, until translucent. Add the chilli and cook for another minute on a gentle heat, then add the spices, and just cook through.

Squeeze the garlic from their skins, and add to the spice and onion. Allow to sweat on a gentle heat while you scrape the creamy flesh from the aubergine. Add this to the saucepan, and cook for 2-3 minutes to combine the flavour.

The tomato and pepper should also be really easy to skin as well by now. Mine just slipped off. Discard the skins, as these are indigestible, and hopefully the pepper skin will have blackened and blistered, so will be bitter and unpleasant anyway.

Add the flesh of the tomatoes and the pepper, along with any juices in the roasting dish to the saucepan. Add the stock, and bring to the boil. Cover the pan and simmer for about 15 minutes.

Blend the soup with an immersion blender or a food processor, until it is smooth and rich.

Run a knife down the corn, to remove the kernels, which should be brown and succulent, not black.

Divide the soup between 2 bowls, add a tablespoon of yoghurt to each, and sprinkle the corn kernels over the top.

Perfect to come home to after a day’s foraging, whether that be outside or in the fridge!

13 responses to “A Silky Soup for September”