Beer Can Chicken and Gravy: Is This The Perfect Roast? 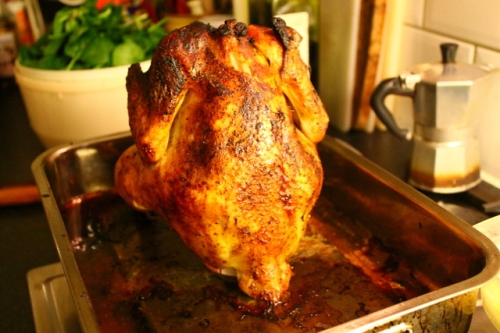 For a while now, the internet has been going on about beer can chickens. As the name suggests, this is chicken, usually cooked over a barbecue, with a beer can inserted where the sun don’t shine.

The other day, the Big Guy wanted a simple roast, and I have been thinking about giving this a go, since I saw Lisa Allen do something similar in the Great British Menu. Like me, she wasn’t going to light a barbecue just for the one dish. I am glad for this, since February in the Netherlands is the perfect time for roasting meat, but not the perfect time for barbecues.

Anyway, I think that is where the similarity ends. I vaguely remembered her rubbing a marinade on the chicken, with which she used paprika and mustard, but didn’t actually look this recipe up until the chicken was roasting away quite happily. She marinated hers in beer overnight, which I didn’t. And she used pale ale, whereas I just used any old lager I found in the cupboard. Our spice rub was similar, but not identical, and she rubbed butter under the skin, which, again, I did not do. Do you know what? I’ve no idea how her chicken would have tasted, but this was blooming delicious.

Having the bird propped upright during the cooking process actually gives a more even roast. Even with a grill to allow the meat juices to pass through, a normally-cooked chicken does not really get the same crisp to the skin, and having the legs falling away from the bird meant that I didn’t get the normal issue of the breast meat cooking before the legs did. The beer kept it moist, and helped to make the gravy really tasty. It also needs a bit less cooking time. It did just start to catch on the top, as you can see, so you do need to watch it towards the end of the cooking time, in case it, like all good conspiracy theorists, could do with a tin foil hat.

Since I never cook a roast just for the Big Guy and I, I invited a newly-resident friend over, to welcome her to the Netherlands. For some reason, we started talking about gravy browning (I’ve no idea how these things come up in conversation, really). She was curious how to see how I made gravy. She said her Danish grandmother would not approve of my method, but she was impressed with the colour I managed to get, despite not using gravy browning. I agreed that I would add the recipe to this post, so that she can practice coloured gravy without the browning.

I think this could be the best way to roast a bird; producing succulent meat, and crispy skin. I’m sure that this could be a controversial position, however. What do you think is the best roast?

Recipe: Beer Can Chicken and Gravy

For the Chicken:
1 whole chicken
150 ml of beer, kept in the can it comes in, otherwise this won’t be beer can chicken, plus 2 tbsp for the marinade
½ tsp English mustard powder
½ tsp chili powder
1 tsp sumac
1 tsp dark muscovado sugar

For the Gravy:
Meat juices and a little of the fat from the pan,
2 tbsp plain flour
200 ml beer, from cooking the chicken
200 ml chicken stock
Pinch of salt

Make paste with 2 tbsp beer, the spices and the sugar. Rub into the chicken and marinate for a while. I did an hour but longer would be better, up to 4 hours would be ideal. Keep any leftover marinade for later.

When the chicken has finished marinating, pierce 4-5 holes in the sides of the can, near the top, so that they are clear of the remaining liquid.  This is easily achieved with an old-fashioned can opener, or corkscrew. Then place the chicken over the can, so it goes into the cavity from the leg side. As long as the chicken can stand on the can, it doesn’t matter too much how far it inserts, but it mustn’t topple over.

Rub or paint a little more marinade over the chicken, and put it in the oven, standing up on the can. The chicken should stand clear of the top by at least 5 cm. After 20 minutes, baste the chicken with any leftover marinade, and the pan juices, and turn the oven down to 160°C. Roast for a total of 45 mins, to one hour, depending on the size of the bird. Mine was 1.6 kg, and took about 50 minutes. Test to see if it  is done, by piercing the thickest part of the thigh, and seeing if the juices run clear.

Once the chicken is cooked, remove the beer can carefully from the cavity. Tent it loosely with aluminium foil, not too tightly,  or the chicken will continue to cook. Leave to rest for 20 minutes.

While the bird is resting, get the gravy going.

Remove most of the fat from the pan, being very careful not to pour off the precious meat juice. You will see the difference – the fat is clear and the meat juices are brown and beautiful. Once you have removed as much as you can, put the roasting pan on your hob, so that it rests over two rings. Turn on the one closest to you, on a low heat, you don’t want both on at this stage, because all the precious scrapings from the pan could burn. Add the flour over the ring that you have just turned on. Add a spoonful of the fat back to the pan, along with the flour, mix well, and keep stirring to cook the flour through until it turns a light brown.

Turn on both rings of the hob on a high heat, and add the beer from the chicken cavity. Stir like crazy while the pan comes to the boil. Deglaze the pan, which will flavour and bring depth to your gravy. Once the beer is boiling, add the stock. If  you prefer, you can now remove the gravy to a saucepan, which reduces the risk of things burning. Stir well, and cook over a medium heat until the gravy thickens a little. Season to taste.

Serve the gravy piping hot over your well rested meat, and with the vegetables of your choice.

14 responses to “Beer Can Chicken and Gravy: Is This The Perfect Roast?”