Dressing Up Your Dinner With Rhubarb

Following on from my inspiration to pair rhubarb with fennel, I have been doing a few more experiments with rhubarb. I have lifted today’s idea almost wholesale from the Mister Kitchen rhubarb tasting menu. They served a sea bass with spinach and a rhubarb vinaigrette. It was great. Of course, I had to come home and fiddle about with it.

Rhubarb is most frequently eaten as dessert, and I am certainly partial to desserts and cakes with it in. People forget that it is actually a vegetable. It is seldom seen in savoury dishes, although I do know that a few bloggers have been experimenting with salads and as savoury compotes lately, so maybe there is a resurgence of rhubarb as a side dish in the offing. Who knows?

I certainly have a few more ideas that I want to try before my plant goes over this year, or I rest it in preparation for winter. Of course, once I am happy with each of the dishes, I will be sharing them here with you.

The version that I ate at Mr Kitchen had a mild olive oil, finely diced rhubarb and kalamata olives, with the stones pushed out, and the flesh torn into chunks. It was rustic and very simple. And it was delicious with the fish and the greens.

I spent quite a while messing about with various things, including shallots, herbs, black pepper, chillies, and so on. I have come to the conclusion that simple really is best. Shallots and rhubarb are both very astringent, so makes for a very sharp dressing, although that might be because I also acidulated the shallots in lemon juice first to take the rawness out of them. This combination as really an ingredient too far for me, so I ditched the shallots in favour of paring everything down

Raw rhubarb is crunchy and subtle. If you decide to follow my lead and make up a vinaigrette yourself, make sure whatever you use does not over power it. I stuck with very simple flavours for this vinaigrette – in fact it is a classic French dressing, with the addition of rhubarb. It works quite well with a pinch of chilli flakes, and with tarragon or chervil, instead of the mustard. I personally think that it is better with the more grassy olive oils, not the really punchy ones, but you may disagree. 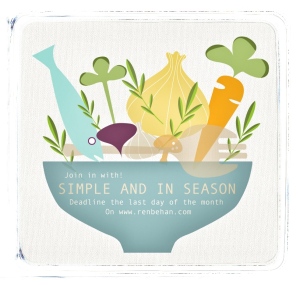 Since there is nothing simpler than a vinaigrette, and rhubarb is at the peak of the season, I thought that I’d be a bot cheeky and have two entries to this month’s Simple and in Season, hosted by Ren Behan.

I do recommend that you give a rhubarb dressing a go. This one was lovely with salad and great with fish (I served it with tilapia fillet). I bet it would also be perfect with pork or chicken too.

What classic dressings do you know that might benefit from a little rhubarb?

Zest of half a lemon, pared

Once the rhubarb is prepared, Whisk together the mustard, zest and olive oil.

I used lemon with this dressing, because I wanted it to go with fish. You could also team the dressing with orange. Grapefruit works as well, although you will need much less than half the grapefruit zest. Which one you choose is entirely up to you, and you can change it to match your dish.

Add the rhubarb, and season. You will need to taste it at this stage. I found that adding a little lemon juice really lifted this into a great dressing, but the amount that you will need will depend on which citrus you are using, and how sharp your rhubarb is; which will vary with age, size and how long ago it was harvested.

Serve immediately if you can, on fish, a salad, or anything you like really. It does keep for a couple of days in the fridge, but it is better fresh, because the rhubarb will lose its crunch. So simple, there’s no excuse not to give this a go!

Tagged as Grow Your Own, Inspired, No Oven Required, Recipe, Rhubarb, Salad, Simple, Simple and in Season, Vegan, Vinaigrette 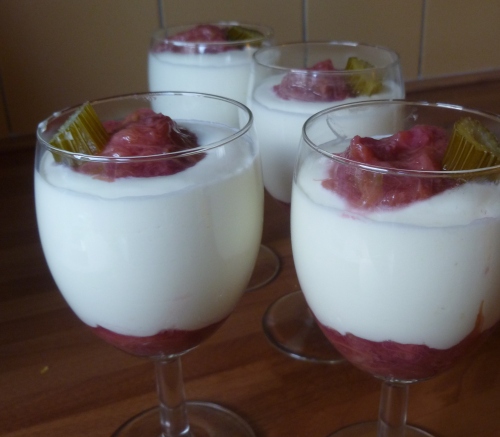 Today’s inspiration has come from two places. During the rhubarb tasting menu at Mister Kitchen at the Rollende Keukens, I had a bit of a revelation. As part of the main, they had roasted a few chunks of rhubarb and served them with pork, and a slice of their very good sausage. The sausage had fennel seed in it, and I tried this with a bit of the rhubarb, and the combination is incredible.

I came back from the tasting with a head full of experiments with rhubarb, both sweet and savoury, and if they work, you’ll see some of them on edible things soon.

But, I knew I needed to do something with the fennel and rhubarb as soon as possible. I am still playing with this, but one of the first things that I did was to stew some up with a few fennel seeds. This really is amazing. And surprisingly, the fennel seems to sweeten the rhubarb, so you need a lot less sugar. I had this with some plain yoghurt for breakfast.

Then, I saw this Month’s Recipe for Life, held by Vanesther over at Bangers and Mash. This is in aid of Swallows, a charity that supports adults with learning difficulties. Vanesther is much more eloquent than I could be on the subject, so please do check out her site to read more about it.

This month, she has chosen rhubarb, spice and lemon as the three key ingredients this month, and I knew this was the challenge for me. It will be good to share the brilliant combination of rhubarb and fennel as, really, more people should know about this.

I deliberated for a few days as to how I could best bring some lemon into the mix. Then I got invited round to a friend’s with some other fabulous ladies, and it prompted me to come up with the dish I am entering. The dish needed to be simple, mobile (because I was going to take it round to my friend’s) and most of all the lemon needed to balance with the subtle fennel.

The obvious choice would have been a classic rhubarb fool. Fools are pretty nice, but there is also something to be said for a syllabub, which is essentially cream and alcohol, and what’s not to like about that? Some kind souls had left a bottle of Pernod, and one of Limoncello following a party sometime, and then I had the basis for a few experiments in syllabub. Turns out that both of these are pretty good, but the Limoncello just about had the edge.

Whilst thinking about this, I decided to try to add some texture with some candied fennel, which I’ve also been thinking of having a go at for a while. It really does add interest and an additional subtle fennel taste, but it would also work without it. And now you know what the suspense was all about from my last post.

So, here is the recipe for my Fennel Rhubarb Foolish. Not quite a fool, and not quite a syllabub, and there’s not a lot that’s foolish about that.

Not Fool, Not Foolish

Juice of half a lemon

Juice of half a lemon

Firstly, lightly stew the rhubarb with the fennel seed, lemon juice, and sugar. Add a splash of water, to prevent the rhubarb from burning as you apply the heat, but be aware that it will give off liquid itself, so don’t add too much, you don’t want it swimming. As I said, the fennel takes the sharpness off the fruit, so don’t add too much sugar, you can always add more towards the end of the cooking process if you need to. Cover the pan, and stew it on a low heat until the fruit just starts to break down. Taste for sweetness and fennel, and add more sugar or fennel seeds (not a lot) if necessary.

If there is a lot of liquid, strain it off. Don’t throw it away, it is great to macerate strawberries and raspberries in, or to use instead of a simple syrup in some cocktails.

Set the stewed rhubarb aside to cool. Meanwhile, whip up the cream, sugar and lemon zest until the cream forms soft peaks. Add in the yoghurt, and fold it through. A classic syllabub is usually just cream and wine, but I wanted this to be slightly more substantial, hence the yoghurt.

Once the cream and yoghurt is well combined, add the lemon juice and the limoncello. Taste to make sure it tastes lemony enough for you, but not so lemony that your face puckers like a disapproving octogenarian. Add more lemon juice or limoncello to taste.

Finally, layer up in wine glasses, with rhubarb, candied fennel, the syllabub, a dollop more rhubarb and the candied fennel stalk to finish. Then bore your friends while you take photos and they wait hungrily for a lovely tagine (that was made by my friend, not me at our dinner party).