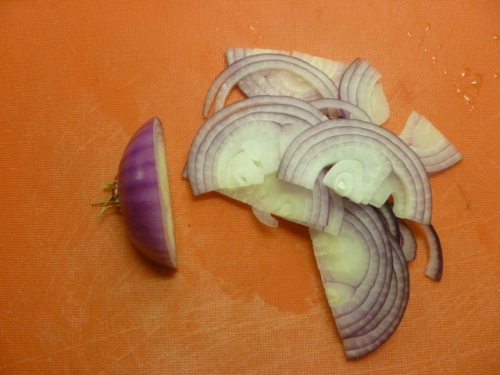 Not Your Lunch Time Friend

Raw onion: a lot like Marmite, it is a very divisive ingredient in any dish. Alliums in general are used to impart flavour to a wide range of food, both raw and cooked, but they are pungent and packed with sulphur compounds that make you cry and give you bad breath.

There is a growing trend amongst lunch venues to put red onion in a variety of salads and sandwiches almost everywhere I have been or travelled to. Why do they do this? Apart from making me really thirsty, raw onions are a little antisocial, especially if you have to return to breathe onion fumes all over your colleagues, and anyone that you happen to be having a meeting with that afternoon. I also think it is really lazy. There are several easy ways to avoid this, without compromising on flavour or crunch.

If I am going to be using shallots in a salad dressing, or taboulleh, I address the problem by soaking them in the vinegar of the dressing before I add the rest of the ingredients. A good 10 minutes in the vinegar will reduce the affect of sulphur compounds, as well as develop the flavour.

Similarly, if I am going to make guacamole, a 10 minute pre-soak of the onion in the lime juice sorts out the problem of onion breath. It really isn’t difficult, and in reality doesn’t add loads of time to your prep, you can do it first, then get on with another element of your salad.

I have been eating a lot of salads, not just because of the 52 Week Salad Challenge, but also because they are healthy, low in fat and they are a great way of tasting the best of the seasons.

In the past, I have omitted the raw onion in a salad, but there are a couple that really are made better by the crunch and flavour of onion, but I don’t benefit from the unquenchable thirst I get when I’ve eaten them in any amount.

Panzanella is one of my favourite salads, but it loses a lot by leaving out the onion. Keeping the onion slices as crunchy as possible is also integral to the necessary contrasts of the dish too. For this reason, soaking it in the vinegar is not the best way forward, as this will reduce the crispness of the bite a little.

I am sharing my recipe for panzanella, because it contains the easiest tip for avoiding onion breath, it’s a fantastic salad, and it uses up leftover bread. What’s not to like? 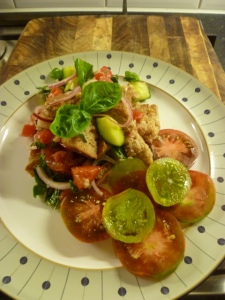 Scented With Summer, Not Onions

This will serve two people on its own, or 5 as a side dish

400 g tomatoes, different varieties, if you can get hold of them. They need to be ripe, and at room temperature.

1 tbsp blackberry vinegar, or red wine vinegar if you don’t have blackberry

If the bread you are using is not stale (although this salad is much better with stale bread), you can dry out the bread in a low oven, or one that has been turned off from cooking something else.

Combine the cucumber, tomatoes and bread in a large bowl, and set aside.

Cover the onion slices in boiling water, and leave them there for about 2-3 minutes. This removes the sulphur from the onion, but does not cook it, so you still get the crunch, but none of the bad breath. Drain the onion, and leave to drip while you make the dressing.

Whisk together the oil, vinegar, capers and the chopped anchovy fillets. Adjust the acidity or oil to taste, but bear in mind that the tomatoes are also going to add acidity. Season well with salt and pepper.

Add the onions and the dressing to the salad, and mix well. Set aside to allow the flavours to develop for at least a couple of hours, or overnight in the fridge, if you can, but serve it at room temperature.

Just before you serve, roughly tear the basil leaves and mix them in.

If you like, you can add punchy salad leaves, like spinach, mizuna and rocket to add extra bulk. Do this when you add the basil, or the dressing will cook them.

This is a great salad to serve at a barbecue, or summer picnic, or as a side dish. It is also the tastiest way to use up leftover bread.

I have been making this soup for years – since I was a student. I have made it so often that I stopped even thinking about needing a recipe for it, and now it is just easy and instinctive. I still make it a lot, because it is the Big Guy’s favourite now too.

I thought that originally it was a New Covent Garden Food Company recipe, but I have double checked both the books of theirs that I have, and it is not there. If this was your soup recipe initially, I am sorry that I am unable to credit you properly, but it is a much-loved and much-cooked dish.

As with all my soups, the amounts vary a lot, although I do tend to stick to only the ingredients listed for this particular one. I wrote the following out for a friend, after we had it on our weekend in the countryside. These amounts here should serve 4 people, or you can keep it in the fridge. It is even better warmed up the next day. It is a hearty and filling meal.

200g bacon, cubed. I can buy little lardons over here very easily. If you are using actual bacon, it is better to get streaky/ back bacon for this. Smoked bacon also works really well

Fry the bacon in a large saucepan over a low heat, so that the fat renders but does not burn. When the bacon is cooked, and slightly crisp, remove from the pan with a slotted spoon, so that you keep the fat. Drain on kitchen paper, and set aside. The amount of fat from bacon will depend on the type and quality of bacon used. You want to fry off the vegetables in the fat, so pour off any excess, but keep enough to coat the vegetables.

Add all of the chopped vegetables, except the chilli to the pan, and fry until the onion has turned translucent. You will need to stir the pan occasionally. Meanwhile boil a kettle with about a litre of water. Once the onion has softened, but the vegetables have not coloured, add the chilli, and cook for a minute or so.

Add the boiling water to just cover the vegetables, bring back to the boil, then turn the heat down to a simmer and cook until the potatoes are tender. The amount of time this will take depends on the variety of potato used, and how big your dice are. For me, it usually takes about 10 minutes, because I chop the veg fairly small. Test with a knife, until you are happy. I don’t really mind if the carrots retain some crunch, so I only ever test the potato.

Once the vegetables are cooked, drain the tin of sweetcorn, and add the kernels to the soup, along with the cooked bacon. Season with pepper. You will not need to add salt, as the soup will get plenty of salt from the bacon, and the cheese. Allow to heat through for a few minutes. Add a little milk, and warm through.

You can make it with varying amounts of the ingredients, just make sure that the amount of carrots balances well with the white vegetables, so that it still has some colour.

Serve with crusty bread, and sprinkled with some grated, sharp cheese, such  as Mature Cheddar or Piquant Boerenkaas

I will add a photo of this soon, as we have it frequently, I just have not got one at the time of writing this post!