We Need to Talk About Salad 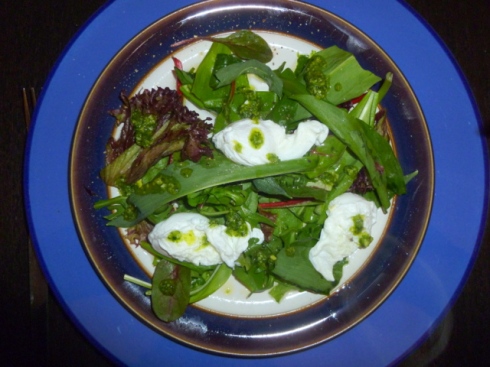 I have been neglectful of my salad posts and chat of late, which I undertook to do as part of the 52 Week Salad Challenge that was issued by Michelle at Veg Plotting. This is not to say that I have not been diligently sowing, foraging and eating at least one salad a week, but I have been away a lot of late, and even without internet for a lot of it (and enjoyed it, actually!) so I haven’t really had the time to tweet and post about it in time for the monthly Salad Days round up that Michelle takes such care over every month.

To make amends, I am doing a bit of a salad round up in time for this week’s Salad Days, and I look forward to reading all of the links and the discussions from all of the others who are joining in with the challenge on Friday.

Where to start then? The last time I blogged specifically for the challenge (as opposed to cheekily tagging it onto other posts), I had been finding and eating the weeds in my garden. 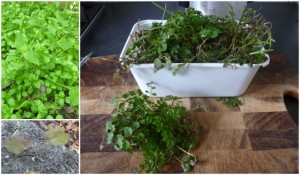 The weeds have continued to form a part of my salads, but since then, the hedgerows have burst forth, and there has been plenty to eat, from there and from my garden.

We have been eating hedgerow staples, such as the carpets of wild garlic (pictured, in my favourite spot), sorrel*, jack in the hedge (aka garlic mustard), and nettles. all of these have appeared in a variety of tarts, salads, fritters and as side dishes in their own right.

The first of these was the wild garlic. For my celebratory birthday meal, back in March, I made a starter of poached quails egg on a bed of salad, including wild garlic leaves. I dressed this with a really lovely wild garlic pesto, which used hazelnuts instead of the ubiquitous pine nuts. The quail’s eggs are slightly richer, and much smaller than hen’s eggs, and the soft yolks were a perfect foil to the pesto.

At the permaculture course I was eating a variety of the salads that they grew there, as well as a number of edible flowers, including nasturtium, herb flowers, those from the various brassicas that had been allowed to go to seed, and borage. If you have never eaten a borage flower, I suggest you give them a go, they are surprising, they taste almost like cucumber, and are a lovely bite to have in a salad. I also found some very old borage seed this year, which I have given a go. I was given this packet of seeds years ago, so I have lost nothing if they don’t come up, and if they do, they will form part of the new polyveg system I am putting in place this year. Hopefully, it will seed itself and attract bees as well as looking beautiful and being really tasty. Apparently, it is a good pot herb to. If the seeds are too old to germinate, then I’ll get some for next year in any case. 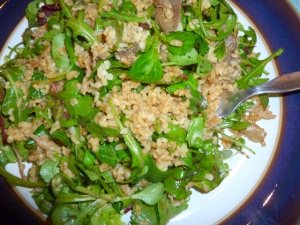 Salad as a Project

I have already told you about the duck salad I made as part of my duck week. On the 2nd week of April, we held our first barbecue of the year, by way of a baby shower for my friend. It was flipping freezing, but it was dry, and a good time was had by all. I made my go-to barbecue salad of radish, cucumber, feta, parsley and mint. This is based on a quick and easy dish by Nigel Slater. I was very proud to be able to feed my guests with homegrown parsley and radishes in this salad. It went down so well, I didn’t manage to get any pictures.

Things are continuing apace in the garden. I have been eating lots of rocket and cut and come agains, as well as the odd leaf chicory. Because of my desire to embark on a polyveg system, I have also been sowing a number of other salad things this year. I have multiple lettuces, beets, and turnips for some tasty salads, well as a number of herbs. I have also discovered that you can eat poached egg plants, so I’m going to give them a go. Inspired by all the people following the Salad Challenge, I’m also giving a few new leaves a go – notably some of the chinese greens, and shiso. I also got hold of some morning glory, which features in Japanese cuisine quite a lot, I think. I am hoping this is the right one, as I really enjoyed it in soups and salads when I was over there a couple of years ago.

Although I love foraging, I would love to be able to grow sorrel in my garden. To date, I have been unsuccessful, although the partially shady conditions are more favourable for me growing sorrel than tomatoes (which I can manage). I have tried for the past three years to no avail. Do any of you have any tips? I don’t even think I have seen any germination. Do you pre-soak? I have been using the same packet, and suspect that it may all be sterile, but any other ideas will be gratefully received. I hate to see seeds go to waste as much as I do food!

Tonight’s effort was garden leaves and some of the aforementioned weeds (all my own), with a mix of tomatoes, cucumber, broad beans and asparagus (sadly not my own, mine aren’t ready yet, and the asparagus won’t be available this year) in a caesar dressing. I cannot really call this a caesar salad though, since it didn’t have any romaine lettuce, which I planted a bit late, and haven’t even made decent baby gems yet. I ate it with a potato salad and a soft-boiled egg, and it really hit the spot – satisfying, yet cool for the hottest day of the year so far.

One of the great benefits of growing-your-own is the tops off the broad beans. Mine are almost ready, although the cold spell put them back somewhat. You can hopefully expect them in a salad post very soon.

* Please note that neither wood sorrel or sorrel should be eaten in large quantities, due to containing oxalic acid, which can inhibit calcium uptake by the body. They can aggravate kidney stones, gout, rheumatism, arthritis and hyperacidity, so should be avoided by people with those conditions. The amount of oxalic acid does reduce with cooking, but wood sorrel would wilt to nothing at all, as the leaves are not very big in the first place.

One response to “We Need to Talk About Salad”